En-Uk Sequoya Hwang
My name is En-Uk Sequoya Hwang, and I was born on May 28, 1999 in Jerusalem, Israel. I started this blog to show my art. I live in Seoul, South Korea with my older sister and my parents. My mother is Korean, and my father is American. 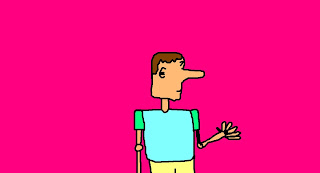 Pinokio
This drawing is called "Pinokio." I made this drawing because I read Pinokio a lot when I was young, and because it is kind of funny that if you lie then the nose gets bigger. The pinokio that I drew is blind. If you look at the eyes, then you can see that his eyes are closed. I think this pinokio is ugly. This pinokio is from En-Ukistan, and there are a lot of pinokios there. Ugly pinokios, and handsome pinokios . . . I think En-Ukistan is the best place to live. I wish some people would come to En-Ukistan. This pinokio is a boy, but pinokios are really hard to distinguish as man or woman. It's a hard life for pinokios. If a pinokio wants to become a person, it has to eat grass for 2000 years, but they usually die before the 2000th year. Well, I don't have anything to say anymore, so I guess bye!
Posted by En-Uk Sequoya Hwang at 8:21 PM